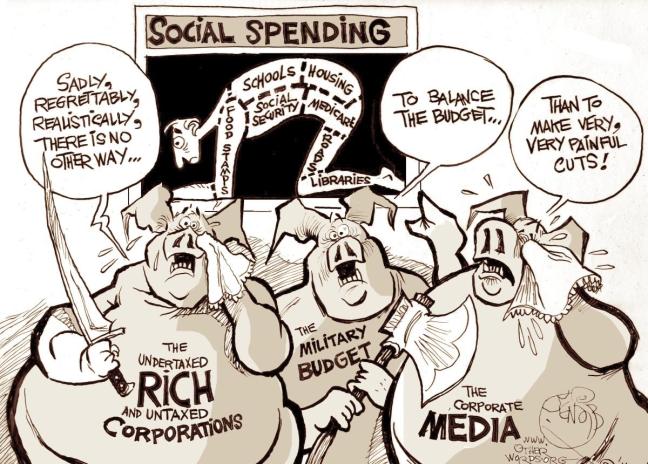 This election, one of the burning points for all political parties is Getting the Deficit Down.

It’s true, we’ve been through tough times over the last 7 years, triggered by the credit crunch at the end of 2007 that was caused by a sour turn in the US housing market due to subprime mortgages, which had the knock-on effect of a financial collapse by mid-2008 and culminated in a global recession in 2009, where borrowing and lending spiralled out of control.

The expected reaction in such a crisis is increased spending by the government as part of their fiscal policy, to stimulate growth in the economy, plus extra spending to help boost and recover countries that we have invested interest in that were hit hardest by the recession. Also in need of recovery were the banks, which had lent too much credit that defaulted when borrowers could not repay loans. So it is fair to say that the British government was in a sticky situation, with deficit on a rapid incline.

However, the cries of fear in April 2009 that the budget deficit would be the largest in UK financial history, and the fixation ever since to cut spending wherever possible and get the economy back to the position it was in before the credit crunch, seem a little overblown when we look a little deeper into basic reason and fact. 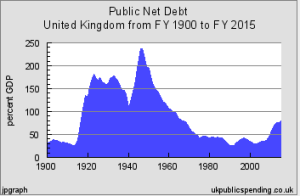 ukpublicspending.co.uk: UK deficit as a percentage from the financial year start in 1900 to 2015.

Take a look at this chart. Yes, a budget deficit that’s risen from £0.76 trillion to £1.36 trillion in the last 5 years is alarming, but let’s look at what that means as a percentage of GDP. The 20th century began with a national debt at circa 30% of GDP. During the First World War it rose to 150% of GDP, and stayed up there, reaching 200% by the end of the Second World War. By the 1970s the government had managed to get debt back down to a reasonable level, at 50%, which declined further to 25% by 1990. Let’s not forget that in the latter years of the 1950s Britain experienced a post war economic boom, where, partly due to restoration measures, wages soared and unemployment all but disappeared. The natural effect on consumer, business and government spending, and also the banks’ willingness to lend, is to become more positive, because of increased confidence. Add this to a succession of Conservative governments from 1979 to 1990, and these figures become all the more comprehensible. Now let’s look at the current deficit. It’s at 81.8% of GDP. In comparison to the mess the deficit was in during the wars, this isn’t too bad. And look how quickly we managed to get out of it!

It is easy to see why we are drawn towards the false security of Austerity Fever. When the Greek government spending became intractable in late 2009, leading to an EU bailout in 2010, all other EU countries were stricken by the terror that the same thing would happen to them lest they began cutting great chunks from every corner of society, and Britain voted Conservative for the best bet of this being realised.

Five years ago, this may have made sense. But in the light of 2015, as we crawl from the darkness of the recession, the one lesson we can learn from the five years of quivering in uncertainty, is that Greece is a one-off. Greece does not have its own currency, which it can print more of when necessary. Greece did not have the safety of a central bank that was behaving itself at the time of its meltdown. Even aside from this, considering economic common sense, surely this austerity game is more likely to constrict everyone into an even more bottomless pit of depression and supress economic healing even further?

Since holding hands with Austerity in 2010, economic suffering is the only result to be recognised, and many of the perceived advantages of a government with Austerity at the helm have since been dismissed on the grounds that supportive arguments contain discreditable speculation. And who is the only country left to still be holding on in imprudent loyalty to the illusory hand of Austerity? Britain.

Of course it is important to keep a wraps on government spending, and of course in the aftermath of a financial crisis the natural economic reaction is to save and be more conservative with expenditure, but let’s try to think about the future. What do you want for your future? All politicians are trying to adhere to the wishes of the Hard Working British Citizen; on students, soon to become Hard Working British Citizens. What do you dream of? Applauding the government for bringing the deficit back down to a healthy percentage? Breathing a sigh of relief when you see that you’ve saved a few percent on tax this year?

Or would you prefer to spend a leisurely weekend after your hard-working week getting a comfortable and fast train for a day trip out: to a subsidised museum; for a wander around a green park; reading books from the library for free; maybe reading to your kids? Will obsessively focusing on Getting the Deficit Down achieve all these things? Or do these pleasurable activities sound more like the results of slightly higher spending, and slightly higher taxation for higher rewards all round? What are we more worried about? A budget deficit or a fun deficit?

Let’s go to Denmark, where tax rates are above 50% for a high-wage earner. Sit by the water in the centre of Copenhagen and watch the hundreds of people jogging, cycling, skating, many with a pushchair in front of them or a child by their side, with stretches of green space, water, urban gyms in every periphery, and we get an immediate visual picture of a society that’s doing well.

We need to focus on the future. And we need to work towards that future today. This means voting for a government that will invest the most in sustainable infrastructure; education; healthcare; equality; culture. Prosperity in the human sense. Not the financial sense.

Let’s take some guidance from our friends (and please let’s keep them that way!) in the EU, and start changing the face of British politics for a real future. And this will start by every single entity of the Great British Public voting tomorrow for the party most likely to listen to our cries and offer us this change.

In the words of Percy Bysshe Shelley:

Which in sleep had fallen on you –

We are many, they are few.”

From the Introduction of philosopher Peter Singer’s book, “The Expanding Circle”:

“If more mobility and more communication were already making a difference [to change the racist attitudes that had existed for so long in parts of the US] in 1944, what should we expect from the vastly greater changes happening now, linking people all over the world, opening up communities that hitherto had little access to ideas from outside? The experiment is underway, and there will be no stopping it. What it will do for the rate at which we make moral progress and expand the circle of those about whom we are concerned, remains to be seen.”

Today’s technology allows us to have immediate virtual contact with people all over the globe. This means that different cultural groups are given the opportunity to mix more than ever before. With increased opportunity comes increased choice. It is down to us to decide what we do with the abilities that we have created for ourselves through this advance in technology. As we share knowledge, understanding and cultural idiosyncrasies with people across the globe through travel, social media and increased virtual communication, more options become available to us, so our decisions become more complex.

“What am I going to have for breakfast today?”, for example. When my mum and dad were my age, it was either cereal or toast, or a Full English on a special occasion. Perhaps a continental croissant. They didn’t dither over whether to have Turkish menemen, or South Asian roti and qeema minced meat, or Georgian khatchauri pastry filled with cheese. Now my siblings and I are young adults we’ve had the opportunity to travel enough and read enough online to be aware of the above delicacies. I crave menemen at least once a week. I’ve never been to Turkey. Deciding what I want for breakfast can be an ordeal where I sift through a long list of options I’ve accumulated. Due to increased mobility, supermarkets now cater for a huge amount of options, and I spend half an hour longer in there because I’ve found fascinating new choices in the World Foods section.

“Which religion am I going to affiliate myself to?” is another one. Due to the increasingly reciprocal knowledge between different cultural groups through increased communication both virtually and locally, we become aware of different religious customs. As soon as we understand these religions to an empathetic level, we can adopt them ourselves.

The internet can be used as a powerful uniting force, and a powerful tool to inform and influence others. Because it’s powerful, it’s also dangerous. But a bad workman always blames his tools, and it’s really down to us and how we use it. It’s like a chainsaw.

Can the integration of diverse cultural communities through increased mobility and virtual communication only make human disasters such as terrorist attacks more frequent? Is this unavoidable because of human kind’s hunger for technological advancement? Is it a part of moral progression which is necessary when so many different cultural groups join to converge their knowledge until it is reciprocal? Can’t everyone just get along? As humankind becomes increasingly more collective through communication and mobility, does its need to make individualistic decisions and re-form into new groups increase? Is that a paradox? What does that mean for the future?

I don’t have the answers. Neither did Peter. As humans, we use the technology we’ve developed over time to help us do things. Humankind will create the answers, aggregated by the individual decisions of each one of the 7.125 billion of us.